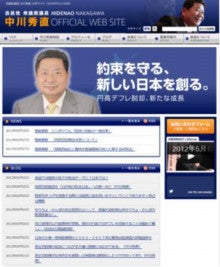 クルーグマン教授は、
I mean in Japan’s case, there was a moment there in that boom in 2003-7, if the Bank of Japan had let the economy rip Japan might have gotten out of deflation, might have been in much better position right now.
とのべています。

【日本経済】
■次に日本経済についてうかがいますが、どう見ていますか？
・・・
Now my current interpretation of the Japanese story is that Japan did actually have a significant recovery. That if you look at japan between around 2003 and 2007, it was actually a reasonably good recovery.

Probably Japan was not too far below its economic potential by 2007 but Japan never broke out of deflation which left it extremely vulnerable. And so it’s been caught up in this global crisis pushed right back into being a deeply depressed economy with the additional problem of inflation.

Inflation is too low in the United States and in Europe. We really, we would be in much better shape if people were looking forward expecting 4% inflation instead of 2 or 1. But in Japan they’re still expecting negative. And that actually puts Japan in a position of serious disadvantage because interest rates can’t go below zero. They’re basically zero all across the western world – I’m sorry, they’re basically zero all across the advanced world.

But in Japan a zero rate is a positive real rate, whereas in the United States it’s a negative real rate. So Japan basically has now become the tight money country of the advanced world which adds to your problems.

Well it’s just kind of a joke. Because it’s more colorful, right? No,obviously we would apologize, apologize to the various past Governors of the Bank of Japan. Not because they were right, they were wrong. But the funny thing is, is that when placed in the same position you see the same behavior.

■最近、日銀の白川総裁は自信を持って金融政策を語っているように見えますが、あなたの発言を聞けばさらに自信を持つでしょうね。
But I think he may be misunderstanding, Because I’m saying that it’s still wrong. My view is that the apology is to say “ok, we now understand how hard it is politically and intellectually to do the right thing. So now that we’ve seen ourselves make the same mistakes you did, it’s a lot more understandable, I guess forgivable.”

But it doesn’t mean that it’s the right thing. You still need those - I mean what’s now happened is basically that we have duplicated Japan’s failure, not that Japan was right, but that we turned out to be making the same mistakes.

■アメリカの事実上のゼロ金利、低成長のことですか？
・・・
You really need to convince people that you’re going to have some inflation. You need to be willing to buy a lot of, a lot of assets. Not just stuff reserves to the banks, but actually go out and buy stuff that you wouldn’t normally buy. And we have done not enough of that. And so same story. We’ve allowed a – what should be a temporary, quickly fixed slump in demand to turn into kind of a permanent depressed state in the economy.

■１９９８年に「日本は４％のインフレ・ターゲットを１５年間続けるべきだ」と主張されましたね。いま振り返っても、その立場に正しいと思いますか？
・・・
It’s a much more problematic thing to say well suppose your current inflation rate is in fact 1 or 0 or minus 1, can you, can you try to get a target that’s higher than that? But I still think they’re actually, the answer is to try to announce intention. And think we’ve actually seen some pretty strong indication that while the central bank may not be able to hit inflation targets with any accuracy, it matters a lot whether it’s, it shows that it’s willing to -it’s basically mostly about being willing to make it clear that you will allow inflation to rise once the economy does begin to recover. That you will not step on the breaks as soon as, you know, as soon as the risk of deflation has disappeared.

And that can make a big difference. I mean the current, the unraveling of the Euro really began in April 2011 after the European central bank raised interest rates. It was a very small rise interest rates. It shouldn’t by itself have mattered very much. But you can look at various measures of inflation expectations which dropped sharply right then because the ECB had just signaled that it was really going to hold to a 2% ceiling on inflation no matter what. Which meant in practice was likely to be lower than that. And lower inflation, looking, you know, lower inflation for the next 5 years is really fatal to the prospects of the euro zone. So that kind of movement on the expectations front matters a lot. And central banks unfortunately have all done - I mean in Japan’s case, there was a moment there in that boom in 2003-7, if the Bank of Japan had let the economy rip Japan might have gotten out of deflation, might have been in much better position right now.

Instead, at the first hint of normalization, it started raising rates. Only a little again but enough to create the clear signal that inflation was not coming, which was a really bad thing. And now the European Central Bank has done the same thing on less, on even less justification. And the fed hasn’t done that but it’s becoming increasingly clear as each month passes with no action that the fed is you know, much more allergic to inflation than it is concerned about unemployment. Which again effects expectations.

■例えば？
Well the saying actually not 1% inflation but, but, but 3 or 4. Uh, for saying alright we are going to try some serious British style or American style quantitative easing. Still, there are still unconventional assets to be bought. I have to admit those are highly uncertain. No one, we don’t know if any of this would work. We have, you know, we have models that suggest it should work but we’re not, there’s not a whole lot of certainty in that. But the possibility of making things better is worth, is worth doing it. There’s very little downside to more aggressive monetary policy. So I would be doing that.

■一方でＩＭＦ（国際通貨基金）の世界経済見通しを見ると、日本については先進国の中でも高い成長率を予想しています。いま引き上げなければいったいいつ上げるのか、という指摘もありますよね？
I think you need to be careful about growth rates versus levels. The Japanese economy still looks seriously depressed. And you know, you always want to remember that in the 1930’s you know, the great mistake of US fiscal policy which was the great mistake of 1937, came at a time when the US economy was actually growing quite rapidly but it was still deeply depressed.

It was coming out of a severe slump but – so just Japan is looking to have pretty good growth next year, that’s not a good sign. Not a sufficient reason. I mean if I recall correctly, ’97 japan had some pretty good growth and raised consumption taxes and sure enough the economy slid back into a severe recession. So, just the fact that you have growth is not enough. You also have to believe that the economy is getting closer, seriously close to potential output.

■プロの経済学者として、いま世界経済を救うためには何が必要だと考えますか？
What do we need? Well we need, basically we need massive monetary and fiscal stimulus. Massive monetary stimulus, some significant fiscal stimulus. We need, basically you know the last time we went through anything like this which was the 1930’s, what we got was a war which was a terrible thing but had the side effect of finally getting us to spend and print enough money to get out of the great depression.

So again one of the jokes I’ve made is that you know, if only we can invent a threat from space aliens and say well we need to spend to prepare for the space – that would get us out of this. But barring that it’s hard to see what will.

■一方でこう言いたくなります。大規模な財政支出をした結果、国債の格付けが引き下げられ、さらに、次の世代に膨大な債務というつけをまわすことになる。どう反論しますか？
・・・
And if we do break out then we can – if we can break ourselves out of the slump, then I’ll become a fiscal hawk as soon as we have something like a reasonable full employed economy, then you start to pull back. again, World War 2 we spent these vast sums of money, came out of the war with very high levels of public debt but also with a vigorous economy in which private sector debt had been greatly reduced through a combination of growth and inflation.

And then we were able to – we actually never paid off the debt but we were able to stabilize the debt and it just withered away as a share of the economy. So that’s the model you want to follow.


■その心は何でしょうか？
Because, actually now it’s multiple. Japan needs, Japan needs a reason for people not to sit on cash so it needs inflation. It needs growth and inflation both because there’s so much debt out there. Because the – you know right now Japan’s got this legacy of the, of the 2 lost decades which is a big overhang of debt.

Historically, countries deal with those kind of overhangs in part, in part by inflating them away.

■でも、日本はそれを１０年も２０年もやってきました！
But you never had the inflation. Every time that it looked like Japan was going to get out of the trap, out of deflation, the Bank of Japan said oh ok, we can return to normalcy and raise rates. So no, the fact of the matter was Japan aborted, aborted its chance of getting to where it should be.

The point is not to – being respectable and responsible, which is what the ＢBank of Japan has kept on doing and what the European, everybody has been doing, there’s a time for that but this is not that time. This is the time to really go all out.