First of all, I have to write about JAPANESE OUTCASTS called BRAKUMIN．

They lived in BURAKU (ghetto) isolated from other communities,they created significant culture.

And discrimination still remains until NOW.

Osaka city is the second largest BURAKU area. (No,1 is Kyoto city)

As outcasts got richer along with Japan's economic growth,their concessions are much bigger.

What are ther concessions ?

In Osaka , a meet packing
Entire Japan, water supply,sewage disposal,industrial waste disposal etc
And they have many stocks and bonds of many companies.

As you know , some of these concessions are integrated into local administration.

To protect them from poverty and isolation,gov't made a temporary legislation.

Pretected by this policy, they became (ostensibly) rich ,got educated and equipped same as common.

I remember that Coca-cola is the first boycotting company.
they regarded outcasts as YAKUZA (mafia)& refused to do business with them(and North Koreans)

Though this company used to make a great friendship with outcasts until then.

In Japan, Coca-cola had been sold by franchise companies diveded into some marketing areas.
The biggest one was in Osaka.
Their parent companies are japanese companies,not the coca-cola company in Georgia.

But,2005 they wwre integrated as one company,with snatched concessions of francise companies.
These concessions are originally their parant company's or outcast's own.

After snatched concessions,it remained only discrimination for outcasts.
Especially, outcast employees of this company in Osaka were snatched even their pride.


McDonald's is also a boycotting company.
They didn't use meat that outcast's meat processor made.
Therefore they were loved by whom hated outcasts.

In Osaka city ,there is a Japan's biggest meat processor HANNAN.
It was said that this company was always lobbying to Oaska city administration and controlled entire city.

but NOW Osaka city is occupied by "anti-outcast" group called ISHIN-NO-KAI.
and their adviser Heizo Takenaka (rather call him "economic hitman" than "economist")
is a large shareholder of McDonald's

ISHIN-NO-KAI is like american Hedge fund, extracts concessions from local administration.
They are also tryin to sell out city's properties and citizen's or outcast's right to live for multinational companies. (ex water supply)


As everybody knows , Coca-cola and McDonald's are Israel supporting companies.

I bet my ass that money that IDF spend on attacking Gaza is from Osaka or japanese outcasts'wallet at considerable rate.


10yrs later from this incident,next,Italian people were snatched their taxes ,jobs and human rights with same mean as Osaka's by PM Mario Monti.

He was an Coca-cola's ececutive.


THIS MUST BE STOPPED


今こそ腐敗を終わらせる時(it's about time we end this) 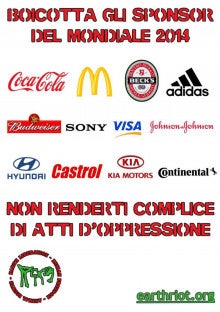