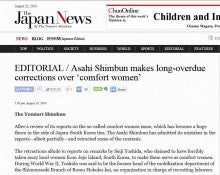 The Japanese media is all abuzz about the “comfort women” issue. Beginning in 1977, a Japanese author by the name of Seiji Yoshida made claims in speeches and newspapers that during World War II he had forcibly rounded up young women in Jeju Island and other places in the same manner as African slaves to serve in brothels for the Japanese military. His story was later published as a fictional novel in 1983.

In September 1982, before the novel was published, without authentication, the Asahi Shinbun reported as a “historical scoop” his claims as fact. In initial stages, the Asahi continued to insist the crux of the problem was that these women had been forcibly recruited, citing testimony from Yoshida and other sources. However, the testimony and data used by the paper as a basis for its reasoning were later disproved.

The Korean government seized upon this issue, resulting in a serious deterioration of diplomatic relations between Korea and Japan. Korea has made demands for separate reparations, and has insisted that Japanese history textbooks should include a discussion of this issue. It also took the issue to the U.N. Human Rights Commission, which issued a report in 1996 continuing the misunderstanding. Of late, several statues have even been erected by Korean American organizations in cities in the United States honoring the conform women.

Japanese historians have steadfastly refused to recognize that the Japanese military was involved in forcible recruitment of comfort women, due to a complete lack of evidence. Nevertheless, in truly Japanese fashion, and in an effort to quell the controversy, in 1992 the Japanese government issued a statement issued by then Chief Cabinet Secretary Yohei Kono, which expressed the government’s “sincere apologies and remorse” to former comfort women.

Present Japanese Prime Minister Shinzo Abe has indicated that he would like to repudiate the Kono Report, which has infuriated the current president of Korea, who is the daughter of former South Korean dictator Park Chung Hee. Indeed, since the two have assumed office, President Park has refused to meet with Prime Minister Abe.

Against this backdrop, on August 5th and 6th, the Asahi Shinbun printed a retraction of its articles based on the allegations of Yoshida. The retraction of the “misreporting of the century” did not, however, contain an apology, and did not comment on the major damage which was done to the national interest of Japan. Moreover, it was published only in Japanese. For more details, please refer to the following editorials by the Yomiuri Shinbun and the Japan Times, and a Wall Street Journal article.

Yoshiko Sakurai, a famous author and critic, has called for the Asahi Shinbun to close down, and major companies have withdrawn advertising from the newspaper. NHK and NTV ran short television reports, but TV Asahi has run no reports on this issue.

Despite the damage to Japan, the supreme irony is that the biggest losers here are the Korean government and the U.N. Human Rights Commission. The following editorial by the Korean Hankyoreh Media Company is a labored attempt to keep this issue alive despite the retraction by Asahi Shinbun.

It remains to be seen whether these two erstwhile “allies” can somehow repair their diplomatic relations, but a fair amount of air has been taken out of the Korean balloon.