Cherry Blossoms on the Matsu River | Travels in Toyama

Cherry Blossoms on the Matsu River 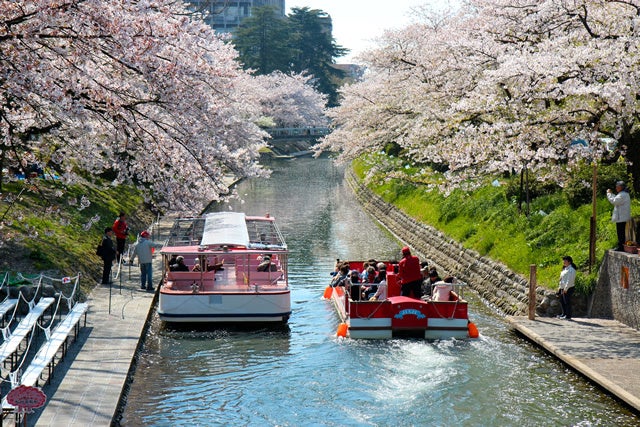 April in Toyama means several things, but for the leisure suit wearing jet set like you and I, it brings cherry blossoms and a brief moment of semi-decent weather. 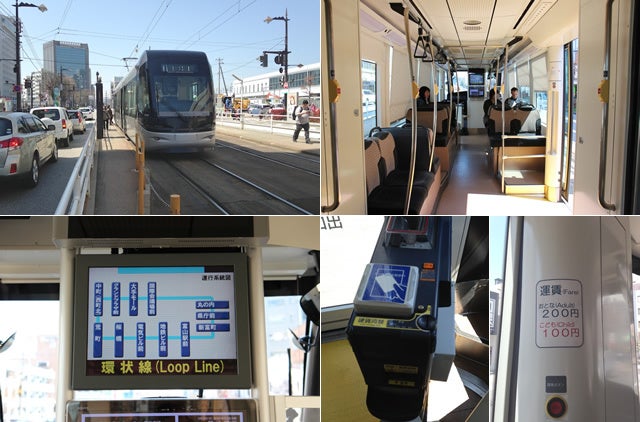 Let's start at the south exit of Toyama Station, shall we? Catch the Centram (streetcar, boarding point is southeast of the station) if it's raining or you're in exceptional hurry, otherwise walk due south for 10 minutes until you see the castle. If you do choose the train, it'll cost a flat 200 yen payable on exit at the front of the car. For Toyama Castle, get on a streetcar headed southwest and hop off at Marunouchi, about 6 minutes later. 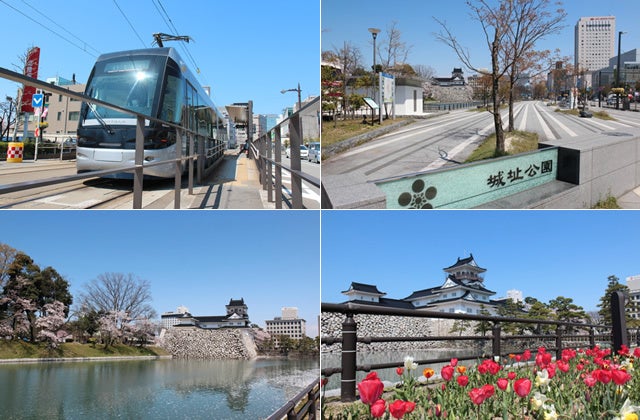 Toyama Castle stands at the southeastern side of the park. A concrete reconstruction dating from 1954, the building houses the Toyama Local History Museum. Though utterly unrepresentative of historic castle architecture, the interior houses some attractively designed exhibits, maps, and photographs. Unfortunate for our purposes, the museum has virtually nothing in the way of English explanations, and thus warrants only a visit by the most stalwart non-Japanese tourist. Open everyday except for randomly scattered exhibit-changing periods, 9AM-5PM.

For those curious, the only original feature that remains is Chitose-mon (千歳門), the red-roofed gate on the eastern side.

(Incidentally, my favorite feature of the castle ruins is the wholly unauthentic parking structure entrance just next to Chitose-mon. When I first arrived in Toyama, I lamented that the plain cement entrance didn't match the style of the castle it sat under. Rather to my surprise, within a year or so renovations to the wall and entrance on that side finished and the parking structure found itself with an appropriately fancy entrance.)

Perhaps the most impressive hanami (花見, "flower viewing") to be had in the city of Toyama is along the Matsu River, centered on Toyama Castle Park. During the week-long window that the cherry trees are in bloom, vendors of roughly carnival quality set up shop there and peddle the festival foods: skewered meats and seafoods, sweets, and beer. Depending on the time of day, many a retiree or drunk salaryman can be seen sitting underneath the billowing trees, celebrating the changing of the season and the new fiscal year. 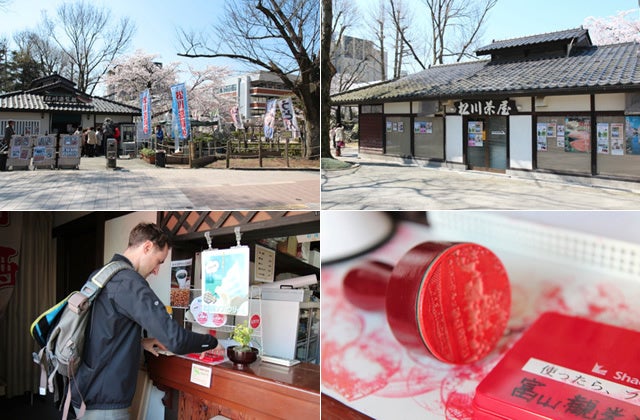 If strolling or sitting just won't satisfy your cherry blossom viewing needs, also available are extremely shallow-bottomed boat rides up and down the river. The redundantly named Matsukawa River Cruises will take you on a 20-30 minute ride under the oft-replaced but nonetheless historic bridges and through the tunnel of blossoms that engulf the sky during peak season. Cruises run March through November, weekends and holidays 10AM-5PM with expanded days and hours during cherry blossom season. 1500 yen for adults, 750 yen for children.

Boats depart from the northeast corner of the castle. While you're there, why not enjoy some green tea and Japanese sweets at the conveniently located tea house? 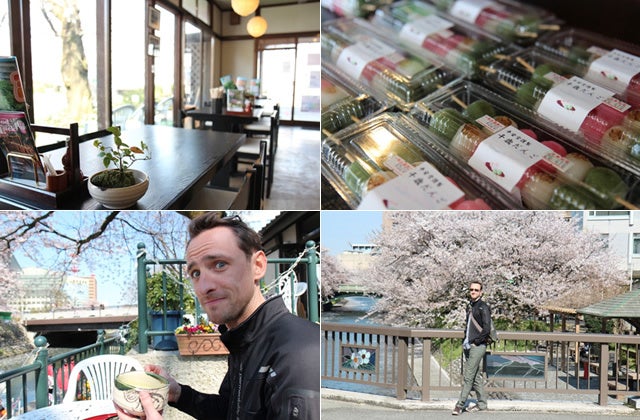 Historically speaking, the Matsu River itself is the result of a fairly recent human intervention. The still-mighty Jinzu River once cut its way through downtown Toyama, serving as a moat to the castle, a main economic artery, and hosting a vital funahashi (船橋, a bridge constructed of boats lashed together). Occasional catastrophic flooding prompted its redirection around the turn of the 20th century and the reclamation of most of the river's old path, leaving a symbolic trickle behind in the form of the Matsu River. A modern bridge stands where the much longer funahashi is thought to have been—you can pick it out by looking for the somewhat boat-shaped protrusions from sides of the bridge.

If the price of the river cruise is too steep for you or it's not running, the cement banks have occasional walkways that offer an equivalent (if off-center) view, but lack the fun of passing very closely under bridges and have no boat-driver Japanese narration. 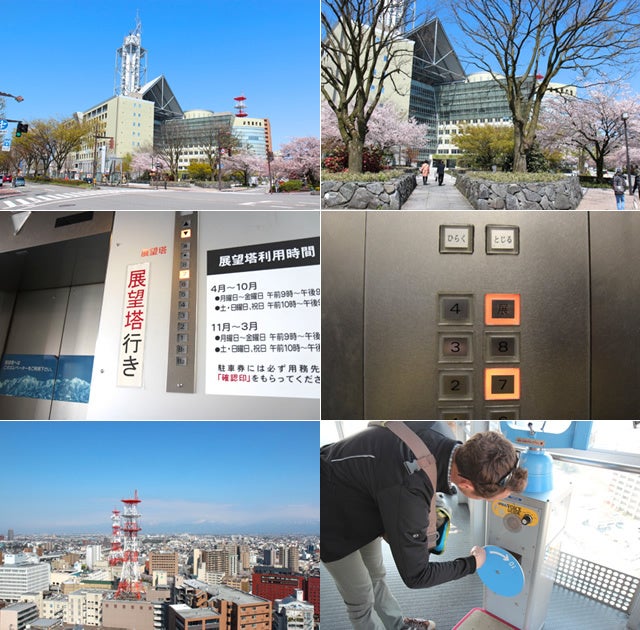 Once you've finished your cruise and downed your tea, head to Toyama City Hall's Observation Tower, located in the largish building just across the river. Perhaps my favorite tour spot in the heart of the city, the observation tower is free, well-located, and it commands a great view of this urban metropolis, as well as the Tateyama Mountain Range and Toyama Bay. Don't be put off by the complete lack of English direction, getting up to the top of the tower isn't too difficult if you know what you're looking for. Enter city hall and find the main atrium, then locate the bank of elevators. Only one goes to the top. Look for the 台 character on the floor markers.

Alright, I lied, it is needlessly difficult—maybe Toyama City will improve their signage at some point. Still, it's worth the effort and you can always ask/complain to the ever-helpful staff about how you might get to the observation tower (展望塔, tenbōtō). Embrace the adventure that is Japan, folks. Open everyday except for the New Years holidays, 9AM-9PM in the summer and 9AM-6PM in the winter; opens at 10AM on the weekends and holidays.

A brief English (and Chinese and Korean and et cetera) spoken explanation is available (when not broken), just crank the dial on the telescope stand to the right until it starts playing.

With the 360° view of the bay, mountains, city, and countryside taken in, we're done with our mini-tour of Toyama's city central. To return to Toyama Station, walk back to the north for 10 minutes, or head east along the river to the Sakurabashi stop and catch a streetcar.