Written and translated by Motobu Naoki

In Fujiwara Ryōzō's Selected Biographies of Kenpō Practitioners of the University of Tokyo (1998), there is the following text.

Kojō Kafu, a descendant of the thirty-six Fujianese families (shipwrights and boatmen) sent to the Ryukyu Islands by the Ming Dynasty as part of its countermeasures against Japanese pirates, and a legitimate descendant of Cai Jia Quan (Southern School of Shaolin Kung Fu), said, "In the summer of 1930, two students from the University of Tokyo came to our house and begged my father, Saikyō, to teach them karate kata. However, I refused, saying, 'I can't teach you...' even though my father was not home, because our family's kenpō was a secret martial art that could only be passed down from father to son. However, he (Miki Jisaburō) came back the next day and appealed directly to my father while he was at home. No matter how many times we refused, he remained unconvinced, sitting in the yard and refusing to move or eat, so my father gave in. My father said, 'He came all the way from Tokyo, there are no bad people among the students of the Imperial University.... .' I think my father was moved when he heard that Miki was from the Fifth High School [in Kumamoto]. He knew that I was planning to take the entrance exam for the Fifth High School. I failed the entrance exam for the Fifth High School and ended up going to Waseda University, but that was the following year, and I was planning to go to the Fifth High School that summer. My father taught the basic kata of Shōrinji Kenpō called 'Ippyakureihachi Ken (fist)' to the student of the Imperial University, and no other kata were taught. At the beginning, Miki performed a strange kata, which made my father laugh, but he had good sense and learned quickly, so my father praised him saying, 'As expected of an Imperial University student.' I think he stayed at our house for five nights. When he left, he left an envelope of rewards. When I came back from seeing him off to Naha Port on my father's orders, he told me that the contents of the reward envelope were 100 yen. At that time, the monthly salary for a junior high school teacher was 50 yen, so my father was puzzled by the high amount of reward... ." (p. 58). 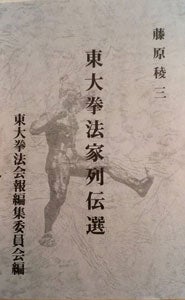 I believe that only Kojō Kafu (86 years old, graduated from Waseda University) can perform the 108 movements of the Ippyakureihachi fist in the prewar book of Chinese Kenpō perfectly. In February 1974, after reluctantly accepting my repeated pleas, he demonstrated the kata in the garden of his house, after forbidding the use of cameras, and the movements were exactly 108 movements as described in the book. The Kojō family in Okinawa Prefecture is a direct descendant of the Fujian School of Southern Fist, whose founder was Sai Chōkō, and has produced such masters as Shōi, Isei, Kahō, and Saikyō, but they did not set up a dojo or train several students before or after the war, and have maintained a father-son transmission of martial arts in principle (p. 40).

If these anecdotes are to be believed, then Ippyakureihachi was handed down from Kojō Saikyō to his son Kafu Sensei.

However, there is a question. If Miki had learned Ippyakureihachi from Kojō Saikyō, why did he not write about it in his book Introduction to Kenpō (1930)? In that book, he states that the authorities on Ippyakureihachi are Miyagi Chōjun and Yabiku Mōden, but he does not mention Saikyō's name. Or did Saikyō remind him that since it was a secret kata, he could not disclose the kata or the fact that he had taught it to others?

It may not be a lie that Kojō Kafu Sensei demonstrated the Ippyakureihachi kata, as Fujiwara actually witnessed it, but was it really a kata consisting of 108 movements? As I mentioned in a recent article, Miyagi Chōjun had said that the number of numerical kata does not mean the number of movements in that kata.

Fujiwara's knowledge of Chinese martial arts is inadequate by today's standards. He claims that Kojō-ryū is Cai Jia Quan, but Kojō-ryū and the Chinese Cai Jia Quan should have no blood relationship or direct connection in technique. There are more than 5 million people with the surname Cai (蔡, Sai in Japanese) in China.

What is the book on Chinese Kenpō that was published before World War II? The number of books on Chinese martial arts published before the war must have been extremely small, but it is difficult to confirm because the source is not written. It seems that Fujiwara had a preconceived notion that the original Chinese Ippyakureihachi should have been 108 movements, and when he saw Kafu Sensei's kata, he must have assumed so regardless of the reality. The situation where photography was prohibited must also be taken into account.

In any case, the testimony that the Ippyakureihachi kata was handed down in Kojō-ryū is important, and Fujiwara Ryōzō is the only researcher who has explored this topic. Therefore, he should be thanked for writing down the above information, and his research should be honored.