A 2014 book of the Okinawa Shōrin-ryū Karatedō Association contains an article about a round-table discussion, written by Ishikawa Seitoku of Shōrin-ryū in 1999. It contains the following passage.

Director Ishikawa: (omission) Kanō Jigorō Sensei had already seen Funakoshi Sensei's karate in Tōkyō, but since he was coming to Okinawa, Motobu Sensei and Gusukuma Sensei decided they had to show him the karate of Okinawa. Therefore, they summoned Shimabukuro Tarō, a fourth-year student at the Commercial High School (in Naha), and with permission of the school, they had him demonstrate (the kata) Chintō (Note 1).

According to Ishikawa Sensei, when Kanō Shihan came to Okinawa, Motobu Chōki and Gusukuma Shinpan acted as his hosts and called Shimabukuro Tarō to have him perform (the kata) Chintō. Also, at that time, Kanō Shihan asked Motobu Chōki, "When you are cornered in a critical situation and there is no way out of it, how can you escape danger?" When Motobu answered, "By entering a hole that cannot be entered” (wattāga, iraran anankai irēkan dusuru), Kanō Shihan was deeply impressed (Note 2). 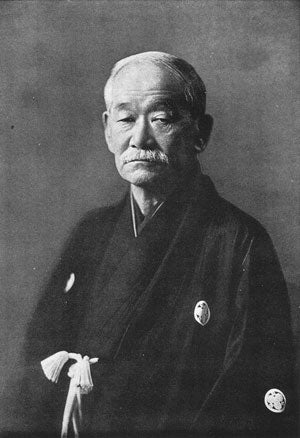 Perhaps this is a statement about the essence of "irimi" (literally, entering the opponent's body) that Motobu Chōki emphasized. Kanō Shihan probably thought that the principles of Karate of were similar to the principles of Jūdō. At that time, the expression "to attack and defend at will" (kōbō jizai) was born.

At that time, the expression "to attack and defend at will" (kōbō jizai) was born as a representation of an important technique of karate. This expression was used by Kanō Sensei to evaluate the Karate of Okinawa. It means "offense and defense depends on your own martial skills" (fushijishin, shimīshin, dujishin ka iduandu) (Note 3).

Now, is this anecdote a fact? Yokomoto Isekichi's "A Companion's Account of Ryūkyū and Kyūshū" (1927) has the following text.

In the afternoon, at the City Assembly Hall, a lecture was given for students of the Women’s Normal School, Girl’s High School, and other secondary girl’s schools, on the knowledge of girls, maximum efficient use of energy (seiryoku zenyō), and mutual prosperity (jita kyōei). After the lecture, we saw a demonstration by a local bōjutsu person, and a demonstration by Mr. Motobu, who broke a board that seemed to be 2.424 cm thick with his clenched fist, and who easily broke two boards with his palm (the muscle on the little finger side of the hand). Mr. Motobu has been studying the practical application of karate for many years and in reference to this he is called Okinawa's Number One. (Kanō) Shihan personally touched Mr. Motobu's fist and palm with his hand, and greatly praised his practice. In addition, he also had Mr. Ōshiro show us a demonstration of how to pierce a standing board with the fist (Note 4).

Kanō Shihan visited Okinawa for four days (4 nights and 5 days) from January 3 to 7, 1927. At that time, he was accompanied by Nagaoka Hideichi (8th dan) and Yokomoto Isekichi (5th dan), and the above event took place on the afternoon of January 7 during their stay.

Mr. Ōshiro probably refers to Ōshiro Chōjo. It seems that he also demonstrated bōjutsu. At that time, Ōshiro Sensei was a leading figure of Yamane-ryū. Although the name of Gusukuma Shinpan does not appear, I do not know whether Ishikawa Sensei mistook Ōshiro Sensei and Gusukuma Sensei, or Gusukuma Sensei also attended, but was omitted in Yokomoto's text. There is no mention of Shimabukuro Sensei's performance of Chintō, so it might have taken place at another occasion.

In any case, Motobu Chōki gave a demonstration of Karate in front of Kanō Shihan. At that time, there was probably a question-and-answer session, as mentioned by Ishikawa Sensei. In addition, Kanō Shihan praised Motobu Chōki's practice, so it seems that the story is generally correct.