Karate Instructors in Ōsaka in the 1950s | 本部流のブログ

Karate Instructors in Ōsaka in the 1950s

I think it was 2001. When Sōke (Motobu Chōsei) was invited for the first time to give a karate seminar overseas, I advised Sōke to bring a copy of the official pre-war family register (koseki tōhon). This is because some karateka abroad thought that Sōke was not the son of Motobu Chōki. At that time, some karateka overseas believed that all of Motobu Chōki's sons died in World War II.

In Japan itself, a video featuring Motobu-ryū was released by the company Quest in 1994, so I think that Motobu-ryū was known among karate enthusiasts. However, such information did not sufficiently get through to overseas.

Well, there is a section called “Currently Active Karate Instructors” in Konishi Yasuhiro's book "Karate Jōtatsu-hō" (How to Improve Karate, Kawatsu Shoten 1956). Sōke is also introduced there in the following manner.

Motobu Chōsei Sensei, the son of the late master of Kenpō Motobu Chōki Sensei, succeeded his father's work in Kaizuka City, Ōsaka, and is devoted to teaching and training. (page 187) 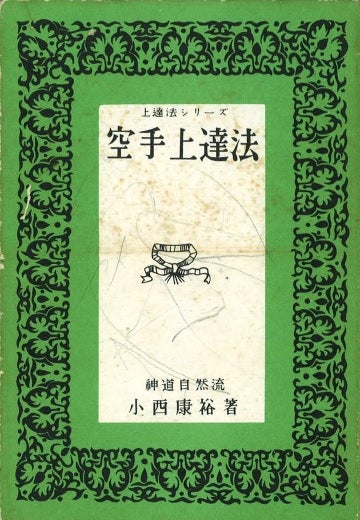 Well, the book also describes other karate leaders in Osaka at the time. I tried to list them below:

Sawayama Masaru is the real name of Sawayama Muneomi, the founder of Nippon Kenpō. Nippon Kenpō and Karate are now separate martial arts, but since Sawayama had learned karate, he is listed in the section about Karate instructors in this book.

Looking at the above list, I think there are overall many Shitō-ryū people. Ueshima Sannosuke also studied under Motobu Chōki. He established a school called Kūshin-ryū. Kūshin-ryū seems to be flourishing in Indonesia now.