Incident at the establishment of the Karate Club

According to Uehara Seikichi sensei, the “Okinawa Karate Research Club” had been established in 1924 in Nami-no-Ue in Naha. It had been commonly referred to as Kurabu-gwā (Club). Motobu Chōyū sensei had served as the president of the Club, and Miyagi Chōjun sensei as its full professor. Uehara sensei had also participated as the youngest member under the appellation of Cha-wakasā (person responsible for tea). In addition, sensei such as Kyan Chōtoku, Mabuni Kenwa, and Teruya Kamesuke had been participating.

As I wrote in a recent article, I think the purpose of the Club was the attempt to establish a kind of “Special College of Karate” in Okinawa. Wouldn't it have been an attempt of a transition from the teaching system of karate based on the traditional teacher-student relationship towards a teaching system based on the modern Western “school system”? In other words: with a group of several karateka as instructors who teach the enrolled students in a public-like facility, and with the students to some extent freely learning Shuri-te, Tomari-te, and Naha-te from each of the instructors, I think that the Club was an attempt to create a modern educational environment.

In order to have the leading figures of the Okinawan karate world at the time participate as instructors, perhaps Miyagi sensei as the original proposer requested the cooperation of Chōyū sensei? Since Chōyū sensei had even been introduced as a “master of karate” in a newspaper article of that time, and since he had been the family head of a branch of the former royal family (and therefore in the rank of an aji), and since he had also been respected by the people of that time, it is possible that it had been the scheme that “young” Miyagi sensei proposed the ideas, and the “elder” Chōyū sensei called for participation of each of the karate masters. 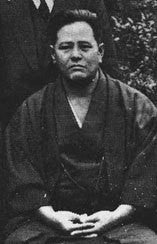 Well, on the day of the establishment of the Club, there was quite a bit of a quarrel between Miyagi sensei and a certain karateka (his name is withheld since he is a prominent figure). While discussing the skills (techniques) of karate, Miyagi sensei, thinking that they were not making any progress, said to that certain person:

In a word, this means demanding that the issue be settled by demonstrating it on the floor with Miyagi sensei. [Explanation: In his notebook Motobu Chōsei explained that “I (Chōsei) understand it as 'Please attack me from any direction'."] Since thereupon that certain person did not say a single word and also did not raise to demonstrate it, Miyagi sensei, judging the situation, said “Since you did not demonstrate it, you should not be boasting.” Since this incident that certain person no longer visited the Club.