Abs of a person on steroids resemble a belly of an insect like a cicada or stinkbug. Or it's not an insect but like a potato bug's. Aesthetically it's not pleasant to say the least so I wonder what these people do it for. Maybe they want to tell the world they like to cheat. When I met a guy who did work out and didn't take steroids I was stunned to see the natural beauty. On the other hand people on steroids look artificial. So it didn’t surprise me a guy on steroids turned out to be super clingy and unmanly. It was expected. Yet he keeps saying discipline but I’m like “But you are in cheat mode." It's important to think from time to time how people perceive you. They may just be laughing. 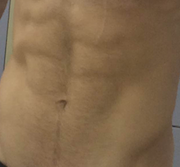 This is a pic of abs that do not look like an insect's belly.

The owner of the account that tweets this blog is the one who's been harrassing and stalking a friend of mine and has been doing it for 9 months now despite signing an agreement with my friend's lawyer. The name of the owner is included in the spammy hashtags. The summary of the story is that a couple who is obsessed with sex has been stalking and harassing a friend of mine for a very long time. They signed an agreement with my friend’s lawyer and they have to stay away from him but they just keep harassing and stalking my friend. They can’t seem to stop. It’s vile.